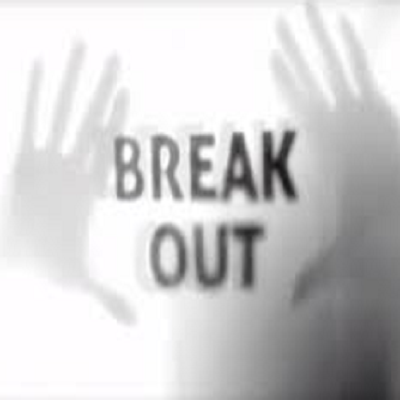 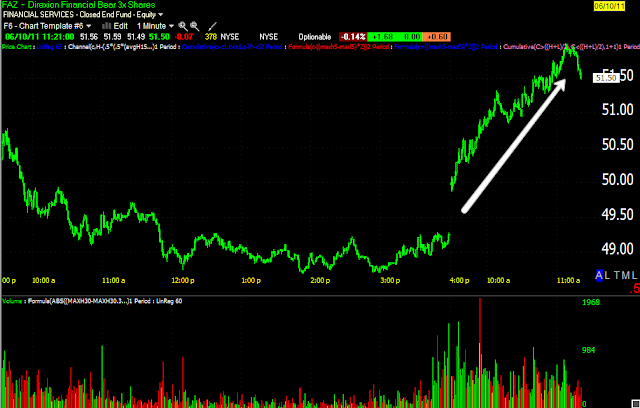 By 11:55 it was clear a triangle was forming. In conventional technical analysis, a triangle forming after a move up is considered to be a continuation consolidation, suggesting another run higher, about equivalent to the first run up to the triangle. This would mean that most technical traders would expect a breakout from the triangle to carry FAZ to the $54.35 area, the buy signal would be a breakout from the triangle. However we saw something earlier that suggested that we might be able to run a counter trend fade on a move down in FAZ-a negative 3C divergence.

At 11:55 I told WOWS members that I’d watch for a triangle to form and then a brief breakout from that triangle. We’d be looking for that breakout to fail and a 3

c negative divergence into the breakout, that would be out chance to buy FAS, a leveraged Financial Bull ETF, in essence fading the anticipated breakout and run up in FAZ. Why did I anticipate a breakout, simply because that’s what technical traders would be looking for. Why did I anticipate the breakout would fail? Because Wall Street knows what technical traders expect and they often will do the opposite, plus we had already seen a negative divergence in FAZ. In addition, a positive divergence was forming in FAS suggesting it was under some accumulation.

Here’s the chart of FAS at the same time. It also formed a triangle and the implication for technical traders was that this triangle would breakdown and fail moving to new lows, but 3C showed positive accumulation in FAS. We now had the basis for a good trade, we just needed the false breakout to make it a high probability / low risk trade.

FAZ did exactly what I expected…
FAZ broke out of the triangle, technical traders bought the breakout, but the breakout was not what it seemed. 3C (my proprietary Accumulation/Distribution indicator) showed a worse negative divergence in to the breakout. Essentially while retail technical traders were buying the breakout, Wall Street was selling short into their buying demand. The negative divergence in 3C made this clear as 3C didn’t move higher at new highs, but lower-distribution. This was our cue to go long FAS-essentially short FAZ.
Over the next hour FAZ lost 5% and FAS, the long trade we bought, gained 5% in an hour! 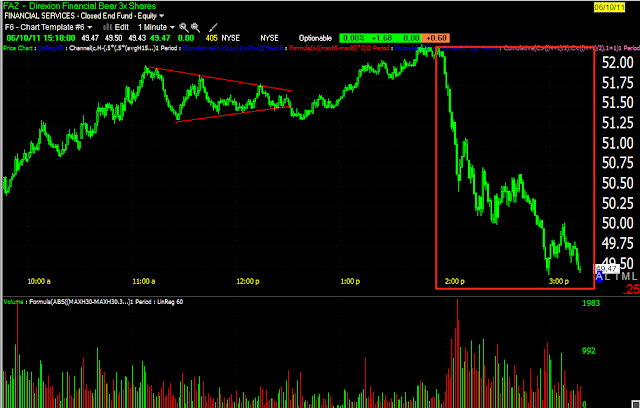 Look at the volume on the sell-off, compare it to the volume on the first chart above when FAZ was moving up. Essentially traders who bought the breakout were at an immediate loss at 2 p.m. when the NY Fed was said to be considering lowering the BASL requirement from 3% to 2-2.5%, this announcement came at exactly 2 p.m. when FAZ fell straight down. However, judging by the earlier negative divergence and Jamie Dimon’s confrontation with Bernanke 2 days before, it’s highly likely that Wall Street was aware that this announcement was coming-why else would we see a negative divergence into rising prices? Why else would we see the false breakout that trapped bulls and created a snow ball effect of selling in FAZ?

Our counter trend trade in FAS looked like this (remember, our cue was to wait for a false breakout in FAZ)…

As far as our exit of this counter trend trade….

We simply watched 3C to make a lower high on price making a higher high which happened around 3 – 3:30 p.m. allowing us to capture almost the entire move, A 5+% return for a trade lasting a bit longer then 60 minutes.

This is just one example of how a breakout can often be a counter trend signal. Technical analysis is now being used routinely against it’s practitioners. It’s time for retail technical traders to adapt, to understand that Wall Street understands how technical traders will react and uses that against them. We see it so often that it’s almost predictable, as in this case, we suspected a counter trend trade before noon time-hours in advance of the trade, we just needed to be patient and wait for the false breakout. Even though this trend of using technical analysis against technical trader has been going on for years, technical traders refuse to adapt to the changes in the market, making that much easier for Wall Street to take your money.
Here’s another example of a deadly false breakout in ADM on a daily chart (these false breakout/breakdowns occur in every time frame from daily down to intraday 1 min charts). The ADM example is a pattern based false breakout, but as I mentioned before, it can be based on support/resistance, gaps, new highs/new lows, etc.

ADM formed a massive triangle, when triangles are this big they typically are considered tops or bottoms depending on the preceding trend; in ADM’s case, it would have been considered a top. As you can see in white, ADM staged a breakout, out of the triangle. One of the rules technicians adhere to is, “If a pattern or signal fails, take the opposite trade”, so the breakout would seem to be a failure of the top and would trigger buy orders. 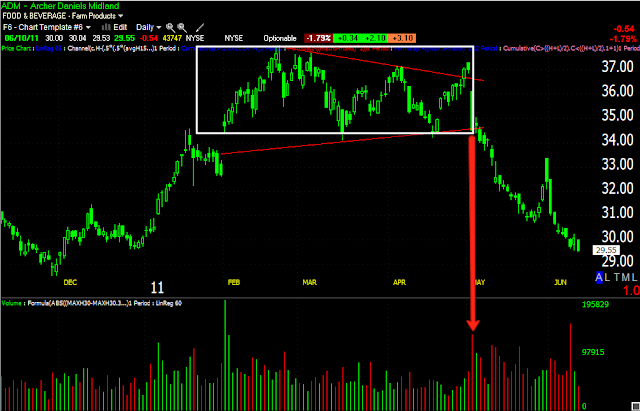 As you can see, the breakout only lasted two days before it failed badly. Anyone who bought in the white square and holding a long position at the time, would have been at a loss the very next day. Note the increased volume on the break as stops were executed.

The daily 3C chart called this a false breakout, as did intraday charts when they posted a negative divergence on the breakout. If the breakout was real, 3C would have moved higher with price in confirmation of the breakout. As you can see by the white trendline, prices were higher at the breakout, but 3C didn’t tick up even a little.

If you think I’m cherry picking tickers, send me a stock you like and I’m pretty sure I’ll find an example of a false breakout, they are just that common. At Wolf on Wall Street, we use false breakouts as a timing indication. Often distribution or accumulation will take place in to rising prices (for distribution) or falling prices (for accumulation). While we can see the underlying action or the true character of the price trend (a stock trending up in to a negative divergence is a disaster waiting to happen) and get a good idea of a reversal by looking for confirmation in multiple timeframes, the false move is one of the best indications we have and often allows us to enter a position on very low risk and very high probabilities.