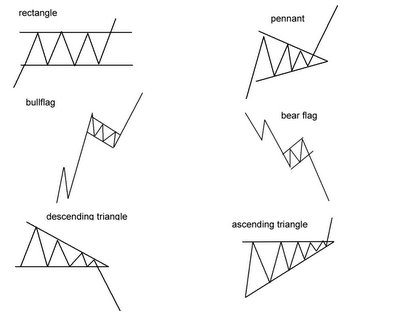 I’m going to try and briefly cover consolidation patterns as there have been some good questions regarding them. The above is a result of my poor skills with graphics, but I think you’ll get the idea,forgive. Consolidation is a well defined pattern of price over a period of time. The patterns come in a few different forms, both bullish and bearish and include: flags, pennants, rectangles, ascending triangle and descending triangles, among others. They can likewise cover a wide range of time periods, from intraday (in terms of minutes, to a week or two, months and even years. When they last years, they can sometimes be referred to as a base and most often take on a rectangular pattern with two horizontal lines, the top representing resistance or supply and the bottom representing support or demand. First up, flags are found in both uptrend and downtrends and are a continuation pattern. You will have a one to several day rally/or decline which forms the flag pole (vertical price appreciation/depreciation on a chart) and then a sort of slanting parallelogram. It typically slants in the opposite direction of the trend, so if the trend is up the flag will usually slant down and vice versa. Flags can also be horizontal, but should not be confused with a rectangle that usually is a little larger and covers a little more time. Another defining feature of most of these patterns is diminishing volume as the consolidation progresses. Pennants are called as such because that is what they resemble, you know the triangular high school football team flag that everyone waves at the game. I personally love trading pennants and find them to be quite reliable. For a great recent example, take a look at CHINA. They often, but not always slope in the opposite direction of the trend and often form after a rapid advance or decline in price. Typically they last a week to a few weeks and there are some longer-term variations of these that are referred to as wedges, but these are very different. As the price narrows, forming this pennant, the volume should diminish and as it reaches the apex (point) you should expect to see a breakout. Next, ascending triangles (bullish) are found in an uptrend and are continuation-consolidation patterns. They are like a resting place for the stock in the context of an uptrend. They are characterized by upward sloping bottom line (demand/support) and a horizontal top line (resistance/supply), forming a right angle-triangle. They act as most triangles (excluding broadening formations) in that they narrow as they progress into an apex and volume should diminish into that apex. Ascending triangles should breakout to the upside and thus continue the price trend. Descending triangles are quite the opposite (bearish) and are typically found in a downtrend as they too are continuation patterns. The difference is with a descending triangle the horizontal line this time is the bottom (demand/support) while the diagonal downward sloping line is the top (resistance/supply). What is happening here is price as is hits the upper line is experiencing a decline in demand, thus the downward sloping line is indicating diminishing demand, the opposite of an ascending triangle. These patterns should break to the downside and continue the downtrend. Rectangles are formed with two parallel, horizontal lines and are found in both up and down trends as well as range bound formations and can be continuation and reversal formations depending on which way they break. There are quite a few other patterns of consolidation that include wedges (bullish and bearish) and a variety of top and bottom formations that include broadening formations and the dreaded, much maligned Head and shoulders top, which can also occur as an inverted head and shoulders bottom (kilroy bottom). I can’t cover them all here as this was just a narrow treatment of a very broad subject. If you have questions or would like to submit further elaboration, please feel free to use the comments link below. I’ll try to point out these various formations as they occur in the charts we look at in the future. Also check out Technical Analysis of Stock Trends by Edwards and Magee.