“We’ll head into next week with market breadth oscillators near oversold levels (20) and I never like selling or shorting an oversold market, especially one that’s near or holding key support levels…but we do have a few others that look like they could fall a bit further before finding support like Dow…

If we get some additional weakness early next week, the Dow could test ists 100-day (light blue) and push breadth indicators into deep oversold territory.

Although all 11 sectors ended lower, Internals are not 1-day oversold today so I lean toward this scenario early next week. Such an oversold condition going into next week could lead to the seasonal Santa rally into the end of the year in a light volume environment, although that’s more of a historical statistical probability than a market signal based probability at this time.”

We kick off the holiday shortened week trading lower mostly due to Omicron-driven growth concerns  following fresh economic restrictions in Europe, and word from Senator Manchin (D-WV) that he can’t support the current form of the Build Back Better Act. To curb the spread of COVID-19, the Netherlands reimposed a strict lockdown, the UK said it’s considering tightening its restrictions, Germany said it will ban travelers from the UK, and Ireland announced curfews. The Europe Stoxx 600 is currently down 1.5% amid concerns that the restrictions will slow down growth.

In better news, NYC Mayor Bill de Blasio said the Omicron surge will be a “fast and temporary phenomenon” lasting “a matter of weeks.” Moderna (MRNA ) announced its booster candidates at 50 µg and 100 µg dose levels neutralized the Omicron variant in preliminary data.

Separately, the People’s Bank of China lowered its one-year loan prime rate by five basis points to 3.80% — its first cut in 20 months — and left its five-year rate unchanged. 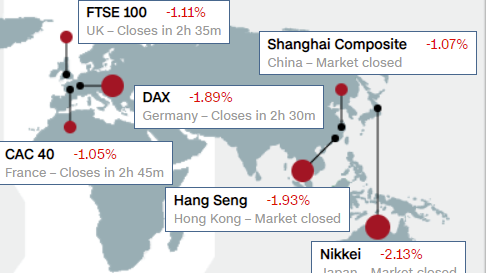 U.S. Treasury yields have edged lower amid lingering growth concerns and the negative bias in the futures market. The 2-yr yield is down two basis points to 0.62%, and the 10-year yield is down one basis point to 1.39%.

Today’s economic data will be limited to the Conference Board’s Leading Economic Index for November (consensus 1.0%) at 10:00 a.m. ET.